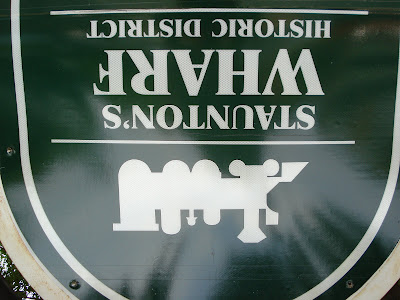 Lo Berg quoted Hamlet at KRONOS Gallery in Staunton last night. That's only funny because this town is Shakespeare-nuts.

She's a good reader whose voice reminded me of an actress I once dumped for being totally fucking cra-cra.
I mean she was crazy, that one.

Lo Berg is a little young to really review. I can't expect her to face real criticism.
But I will say this:
She was very good at moments. She needs to stop rhyming so much. She should read experimental shit and start experimenting. Stop looking earnestly at the audience after every poem; it comes off fake or self-congratulatory. Lo Berg has a great reading voice, and she's pretty good at working an audience. She's a got a lot of confidence in her.

Does anyone like funeral poetry? I've seen famous poets start getting all teary-eyed and read a poem they'd written for a dead friend or relative. Save it for the funeral or just read it without introduction. Why do so many poets think they need to include a sob story in every reading they give?

Actually, I don't know how old Lo Berg is, and I just reminded myself that you open yourself to harshest criticism when you stand in front of a group of people and call yourself a poet. Beware poets: whenever you give yourself a title, you simply must live up to it.

The open mic. in the beginning was pretty fun. Fairly standard stuff, but there were a couple of gems in there, including a woman with a country accent reading famous poetry and a bear-bellied rocker-haired local reading his own work like what he thought a poet should sound like. That was fun.

And the KRONOS space was awesome. The peeps who run it are bent on changing the art world and the world in general.
Or something.
But I like their boldness for creating a scene in Staunton of all places. Staunton seems filled with such spirited individuals, people who don't want to leave but disdain the horrors of stagnation. I love people who will their dreams into reality, and when I come back to Staunton, which I certainly will, I hope KRONOS won't have given up on poetry readings. I also hope that they train their audience not to clap after every single poem. Clap at the beginning and end, and everyone will be much happier. 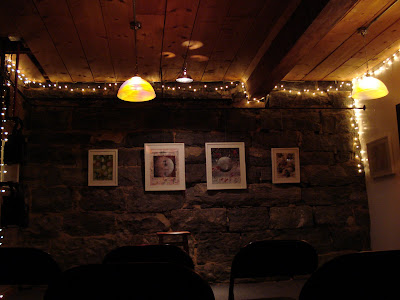 So frustrating, that clapping thing.
Posted by Sky Jack Morgan at 6:44 AM