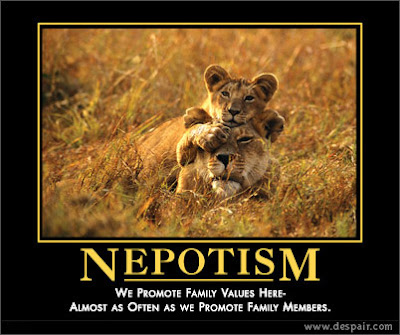 So, I wasted a good evening voting. I understand why people don't do it. I do it out of some Machiavellian idea of civic virtu. Without people believing in some kind of duty, a republic disintegrates. The republic is important, I guess.

Politics is a nasty business.

If everyone you know who is winning awards in poetry are or have been students of the same poet, what do you think is happening?

a) He/She is a great teacher.
b) All the people you know are just great poets, and the connection is just coincidence.
c) The teacher is the anonymous judge.

That's nothing new. That's the way things go in poetry, I guess. But sometimes it happens to such a degree that it is impossible to ignore. If Jorie Graham had only given one or two of her students awards, no one would have said anything. Nepotism is part of the game. Bobby Kennedy wasn't made Attorney General because he was the best lawyer in the land, and people don't laud Anselm Berrigan as a wonderful poet because he is indeed a wonderful poet, but maybe they both were, respectively. The thing is, Nepotism happens. But when it happens as much as it is happening at Berkeley right now, it cheapens the whole idea of meritocracy. If NO ONE is winning on merit, what is the point of doing it at all?

Guess what! rich people get to go to college more than poor people do. If your dad went to Yale, you have a better chance of going, too. But sometimes someone who deserves it based on their performance alone, and that is why schools like Yale are considered among the best. People ignore the nepotism because there is still enough merit-based promotion there. The necessary evil is just that, necessary.

In poetry and in all the arts, it is necessary, too. Money has to come in from somewhere. Hollywood and poetic dynasties are necessary. They fill theaters and sell books. But what of integrity? I Am always surprised about how little integrity there is.

Gloria Frymm said at a reading something I might never forget, "poetry is incestuous; deal with it." I think I agree with her. I think I like her attitude about it. But is that all it is? Someone at UC Berkeley thinks so.

I am reading with Gloria Frymm at Galeria De La Raza this weekend at 6:30. I'm first up. Should be fun. I hope all of you can make it.

Here's who else is reading.