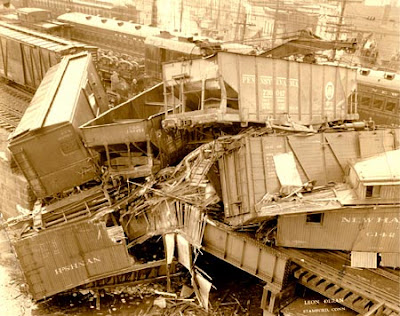 Myriam Gurba was Pegasus's first prose writer in a long time. She was one of those girls whose tattooed arms give you the impression that she is probably one of the sweetest people you'll ever meet. Then, when she opens her mouth and you hear her speak and read, you know that she is one of the sweetest girls you'll ever meet. She went to UC Berkeley for Econ. Now she's writing literature that deals extensively with lesbian eroticism. She teaches high school somewhere in Long Beach. A nice little reading for Cinco de Mayo. And even though I had been drinking 2 dollar Coronas with some of the Trainwreck, and even though Clay and I were the only Trainwreckers there, she somehow managed to keep my undivided attention. That's a little hard to do with prose, methinks.
++++++++++++++++++
580 Split. There were more Trainwrecks at Eli's Mile High Club in Oakland to see the lovely Erica Staiti MC a reading celebrating the release of their new publication. The three who ended up reading were TREVOR CALVERT, JENNY DRAI, and JAVIER HUERTA. All young poets who were a pleasure to see up on the stage.
------------------------------
Everyone ended up at the graduate where even more Trainwreck Union members had arrived at the same idea.
Where were you?
Posted by Sky Jack Morgan at 11:58 AM