The Police, Joanne Kyger, and Celebration

This week has been a trip for the members of the Trainwreck Union.

We aren't entirely sure what we should or are allowed to discuss in an open forum such as this blog, but something must be said about what has been going on because so much is already flying around that it is quickly becoming the stuff of legend. Please excuse the ambiguity of this post, as it is necessary to tread lightly at the moment.

Two nights ago, three of the Trainwreck Union's founding members were informed by the UCPD via email that they were the focus of an investigation. Someone whose name will not be mentioned here filed a false police report against us. The accusations ranged from the petty to the ludicrous and are the subjects of many of our current laugh-chocked conversations, but to not take them seriously would be erroneous as well. When the police get involved, it's serious. Some of us are outraged, some of us are scared, and some of us are hurt. We were called in for an "interview," which is a euphemism for "questioning." The difference is that we didn't have to sign anything. After speaking with us, the police agreed that the claims were unfounded, and we were released without even a threat of a follow-up. The thing about police is that they can generally smell bullshit from a mile away––that is one thing they excel at, the good ones. They were professional and friendly, and didn't go out of their way to try and make this thing bigger than it actually is. We all appreciated that. . . after all, I am one of those unfortunate few who have been on the business end of a cop's bad day (j-walking tickets cost $117 in Berkeley). . . I've had a few bad experiences with the police. . . these police were johnny on the spot, though.

Anyway, we all hope that the berkeley poetry review's continuing harassment of our group will soon come to an end. It must be painful for them to see us do so well. We try to push envelopes, we try to create, we try to be at our best, and when they sit on their hands wondering how we're dong all that we are doing, how we have attracted the most talented people in the area to support us and be a part of what we are doing, it must be really hard being them. But I cannot give them talent. . . I cannot really give them anything. Their lack of talent, though, is no excuse for this.

Many of you might have read retaliatory blog threads and facebook threads that seemed to cross lines, and I am not defending those. They were stones in a battle of stone throwing. They were unwise maneuvers. But a false police report accusing us of crimes that could land us in jail if they were true? Nothing warrants that. That is a serious crime.

What's next? We hope nothing. We all hope that this is over. The police report will be available to us in ten days, and we will be able to tell more of the tale. We have been laughing about it, but we all know how we've been wronged. Things like this ruin careers and futures and all the fun, too. If you've been reading this blog, or if you know any member of the Trainwreck Union, you know that we are very much about the fun of it. We may get dark about things from time to time, but we are all about the fun of poetry and art. We love it. We live for it. It is the only toy worth having. How dare someone threaten that.

We feel kind of like poetic gangsters right now. I wonder if I am Sonny, Michael, or Fredo. I am probably Fredo. . . he's the stupid one.

Joanne Kyger at Lunch Poems yesterday was rad. That's right, I said rad. A couple weird moments, and political poetry wears me thin sometimes, but all in all, what a fantastic reading. She had a wonderful style in her presentation, her poetry is way cool weekdays, and she wore huge rose-colored rock-star glasses. Lunch Poems really saved the best for last. Also, say what you will about Robert Hass--I know it's cool to hate poet laureates like they would care--but he introduced her in such a way that made me feel like, "shit, I can't wait to hear her read!" He was great, she was great, and I bought her book and got it signed. . . something I almost never do. And when I got it signed and shamelessly told her about the Union, she was super, super cool and made me feel the same. Once I heard someone define "having soul" as being able to make a person, regardless of their situation, happy to be alive. . . Joanne Kyger has soul.

All around a great experience.
I kind of love her. So, to all of those who said I was guilty of Ageism, bugger off. 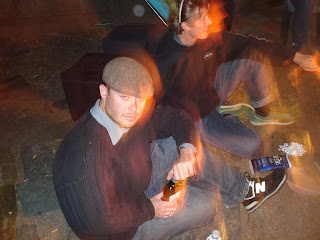 After all of that we had a bonfire at the dwelling spot of one of the most talented people in Berkeley: Beatrix Chan. I don't know if I have mentioned her before, but she is an amazing film maker and a pretty good poet. She had a bonfire at her place where Gillian Hamel, Sara Mumolo, Alex Snipes, Beatrix herself, I myself (Jack Morgan), read their poetry. After we read it we burned it. Cliché? Maybe. . . but fuck you it was awesome. Casey played guitar, and we sang, and it was good. He's going to be our musical intermission on the 13th of May at 21 Grand if you want a taste of the genius we partake in when we are on these outings.
Posted by Sky Jack Morgan at 3:32 AM

how are the university police different from the church police?

They haven't learned how to forgive.

It's important to note that Fredo shamed his family by bangin' cocktail waitresses two at a time.

That sounds a lot like some poets I know.